​The property that the CV Rich mansion was built on originally belonged to Howard Willetts. Mr. Willetts had extensive holdings in the area and at one time owned almost all the land from Mamaroneck Avenue to North Street from Ridgeway to what is now Heatherbloom Road. In 1905, Willetts sold a portion of his estate to Robert B. Kerr. The original property included 41 acres on the south side of Ridgeway extending south nearly to Sammis Lane and east to what is now Westchester Hills Golf Club. (Robert Kerr was an avid golfer and instrumental in forming the United States Golf Association although the golf course was not constructed till after 1912.)
In 1910, Robert Kerr transferred a portion of his holdings to his brother Thomas Hamilton Kerr. Thomas Kerr was a wealthy stockbroker from New York City who built the mansion as a summer residence. White Plains, at the time, was considered “the country” and many wealthy New Yorkers built homes here, a kind of Newport South.
The house was designed by the architects Harrie T. Lindeberg and Louis Colt Albro, formerly of the renowned firm of McKim, Meade and White. The style is that of an Italianate villa featuring stucco walls, palladium windows and many oversized doors for circulation of air. The original roof was red tile. The property consisted of 41 acres with a barn (now a home on Ridgeway Circle), a large garage near where the auditorium stands now and many fruit trees. The grounds included beautiful, terraced gardens and a small reflecting pool. Legend has it that a tunnel once connected the barn with the main house. Construction was completed in 1911.
Sadly, Thomas Kerr died in 1913 and the house was rented for several years. In 1916, it was sold to Charles Vanderlip Rich or more specifically his wife Ethel whose name alone appeared on the deed. 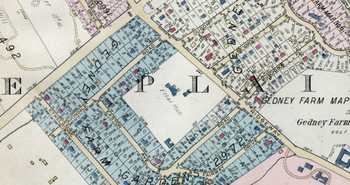 Map of Rich Property c 1930
​Charles Rich was born on 10 June 1881 in Wisconsin but his family later moved to Chicago. He got his start in the banking business at age 15 at the Illinois Trust and Savings Bank of Chicago. It was here that he met Frank A. Vanderlip. (Charles Rich adopted Vanderlip as his middle name in honor of his mentor.) When Vanderlip moved to Washington DC to serve as secretary to Lyman Gage, Secretary of the Treasury under William McKinley and Theodore Roosevelt, Mr. Rich followed as his private secretary. Vanderlip was eventually promoted to Under Secretary of the Treasury but left the Treasury office for New York. Charles Rich stayed on as personal secretary to Mr. Gage until he resigned in 1902.
After Gage resigned, Rich also headed to New York where he worked for the bond company of Farson, Leach and Company. In 1909, he was hired by Frank Vanderlip to work at the National City Bank of NY (later to become Citibank). The National City Bank of New York was the largest in the country in 1894 and in 1906 held eleven percent of all Federal bank balances. It helped finance the Panama Canal in 1904. Rich worked his way up at the bank from bond clerk to head of the department, vice president and then executive manager. In a reorganization, he was passed over for president of the bank and retired in 1921. Rich was said to have amassed millions while working on “The Street”. 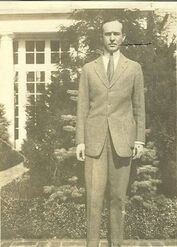 Charles Vanderlip Rich
​While in New York, Rich met and married Ethel Gazlay of NYC in April 1906. They had two children, Charles Jr. (1908) and Betty Lee (1914). At one point, the Rich family employed 7 servants who lived in the mansion, including a governess, tutor, waitress, cook, kitchen maid, chambermaid and laundress.  Silver Tiffany cigarette lighters were reportedly common party favors given by the Riches to house guests. The family lived in the mansion until 1931 when they moved to New York City. CV Rich died 3 January 1951 in Manhattan at the age of 69. Ethel Rich passed away in Charlottesville VA in 1981 at the age of 98.
In 1931, the Woman’s Club of White Plains (then known as the Contemporary Club) bought the house and 4 acres of land from Ethel Rich for $87,000. (The remaining land was ultimately sold to a developer who constructed the homes on Ridgeway Circle. The original barn still exists as a private home.) The contract of sale stipulated that nothing in the house be changed but Ethel Rich did consent to having the garage torn down.
Per the agreement with the Riches, the house has remained essentially unchanged and retains many original features. In the foyer, the closet doors contain Mercury Glass, double blown and silvered foyer was used by children and servants so as not to disturb guests. It was known as Peacock Alley because of the wallpaper once lining the walls.
The original ceiling beams and paneling in the living room were dark, and the walls were covered with Japanese grass cloth. The sconces in the living room, library and dining room are originals. Although the breakfront is not, one very similar to it was part of the Kerr furniture. The chimney piece is carved wood imported from Italy.
The library bookcases are hand carved with double leaded glass panes. The fireplace and andirons are original to the house. Portraits of Ethel and Charles Rich hang on the back wall. In the bookcases behind the sofa are a gavel made from wood from the floor of the Lincoln bedroom and the silver bowl in which the mortgage to the house was burned in 1956. A bust of CV Rich Jr, created by Rudoph Evans (sculptor of the statue in the Jefferson Memorial) is also found in the bookcase.
In the dining room, the fireplace is unchanged. The décor here originally reflected the influence of Robert Adam, a Scottish architect. The moldings were light gray with rosettes and garlands of white set at intervals. The paneling consisting of large flat surfaces contained occasional pastoral or dancing scenes. The murals currently in the dining room probably date from the late 19th century. They are not described in a 1913 article on the house and were probably added by the Rich family.
The tile floors and light fixtures in the sunroom and tearoom are original as well. The light fixtures were once probably bronze but were painted black by an overzealous caretaker. Some of the painted windows contain mercury glass underneath. The fireplace in the tearoom is of Italian Istrian marble and is thought to have been carved in the mid 1800’s. The marble fountain once held goldfish.
The upstairs of the mansion had a master bedroom suite with a large fireplace and adjoining bathroom. There were three additional bedrooms, two of which were connected through a bathroom. The third bedroom also had its own bath. Toward the front of the house were the servants’ quarters. A staircase in this area allowed direct access to the original kitchen. Today, these upstairs rooms serve as administrative offices for the Woman’s Club as well as a bride’s and groom’s rooms. The servants’ quarters were converted to an apartment for a caretaker.
The reflecting pool behind the house was removed for safety reasons shortly after the Woman’s Club purchased the house. Although there are no longer fruit trees in the yard, the beautiful, terraced gardens have been retained.
​Construction of the auditorium was begun in 1931 immediately after the house was purchased under the direction of well-known architect Phillip Brooks Nichols. A note of congratulations was received from the Hoover Administration for creating so many jobs during the Depression. The original kitchen was enlarged and connected to the auditorium through an enclosed walkway. The original plans for the auditorium called for a balcony which was never constructed. A ladies’ lounge was constructed downstairs along with two coat rooms, remnants of which are still visible.  Although there was room for a men’s lounge in the area above the lobby, it was not completed. Construction was completed in 1932.
Early on, the auditorium hosted a summer theatre with performers from New York City entertaining the local population. In fact, for many years, remnants of dressing rooms for the actors and actresses could be found in the ballroom basement. Throughout the years, musical groups as well as lecturers including Eleanor Roosevelt, Carl Sandburg and David McCullough have appeared in the ballroom. Prior to the institution of fire codes, up to 600 people attended events in the ballroom.
In 2002, Betty Lee McClelland, daughter of CV Rich Sr. visited the mansion along with her daughter-in-law, Jill Rich and C. Carter Rich, grandson of CV Rich Sr. Betty recalled playing in the sunroom as a young girl and noted that the mural in the bathroom off today’s groom’s room was painted for her as a birthday present. After this luncheon, the Riches granted the Woman’s Club the right to use the name of The CV Rich Mansion for the clubhouse. Since 1931, the mansion has proudly served as the home of the Woman’s Club of White Plains and its philanthropic mission.